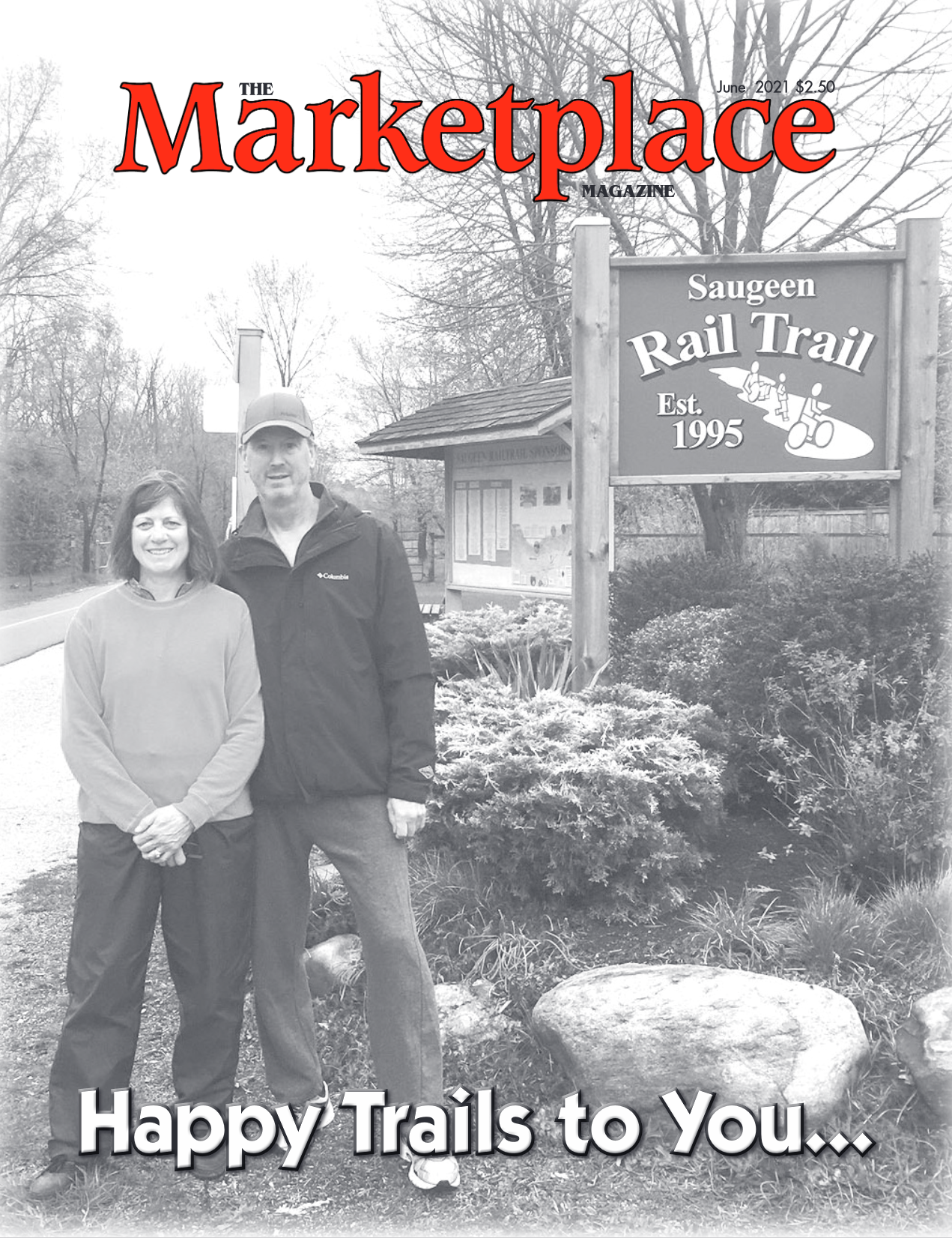 Blazing the Trail (From Marketplace June 2021)

(We recommend viewing this article in it’s intended format, which includes photos, by clicking HERE.)

In decades gone by, locomotives chugged along what is now the Saugeen Rail Trail, bringing residents and summer visitors to the lakeside towns of Port Elgin and Southampton. Today the trains are gone, but the route they took is still travelled by locals and visitors. Only now the travel is on foot, bicycle and snowshoe.

For over 25 years, a group called the Saugeen Rail Trail Association has been maintaining and improving the Saugeen Rail Trail, a year round, multi-use trail system that connects Southampton to Port Elgin and beyond. Built on an old Canadian National Railway (CNR) line, the trails are used by countless thousands each year. Permanent residents and summer visitors. Young and old. Walkers, runners, hikers and cyclists. Even those on snowshoes and cross-country skis. Making the Rail Trail one of the most popular and widely used trails in Bruce County.

It started out simply enough. When the CNR suspended freight operations from Port Elgin to Southampton in the 1980s and abandoned their tracks, a group of locals got an idea. According to Bruce Alexander, Director of Trails for the Rail Trail, “they thought the rail bed left behind would make a great walking path.” So they founded the Saugeen Rail Trail Association. At the Association’s prompting, Port Elgin, Saugeen Township and Southampton acquired sections of the rail bed – and in July of 1995, the Saugeen Rail Trail was officially opened. It took off from there. “At first the goal was simply to establish a clear corridor for people to trek along,” Bruce says. “But under the guidance of the Association, it became so much more than that.”

The Saugeen Rail Trail Association is a non-profit, charitable organization overseen by a Board of nine dedicated volunteers. Their mission is to preserve, maintain and enhance the historic rail line as a trail for Saugeen Shores. And they have been more than meeting that mission. “Every year the Association makes the trail system bigger and better with improvements and extensions,” Bruce explains. And he should know. A member of the Rail Trail Association since the year 2000, he has been involved in just about every one of those improvements and extensions.

He has helped to construct walking bridges along the trail. Built connecting links between pathways. Assisted with paving kilometers of the rail bed to make it more accessible. And this past winter, he and the Rail Trail Association undertook a COVID project. Popular Pursuit According to Bruce, they wanted to open up the trails for winter use in order to give people a safe place to get outside and stay active during the pandemic. Especially in the face of closed gyms, pools and other fitness facilities. To that end, they purchased a groomer and prepped the snow-covered trails for winter walking, snowshoeing and cross-country skiing. They even widened many sections of the trail to allow for social distancing.

As Bruce puts it, “As long as the community keeps supporting and making use of the Rail Trail, we’ll keep working to expand and improve it.” And the community is certainly making use of the Rail Trail. Everyday, up to 800 people are out on it. Which is not surprising. Trail use is one of the top three recreational pursuits in Ontario. According to the Ministry of Tourism, Culture and Sport, more than 25 percent of all Ontarians walk, run, trek, cycle, cross-country ski and snowshoe on the province’s trails annually. The benefits of trails are far-reaching, too. From social to environmental – the Rail Trail is lined with gardens as well as preserved flora and fauna habitats – to health and wellness. As highlighted in Ontario’s Board of Health guidelines, access to safe and affordable recreation such as walking trails, not only promotes mental health, but also helps to prevent and manage physical issues such as high blood pressure, diabetes and heart disease. There is another benefit to the Rail Trail, as well. An historical one. The trail system celebrates its rich railroad history with signboards and information installments all along its route. An example is the Historical Pavilion, located at what is called the Rotary trailhead at Elgin Street in Port Elgin. Partnering with the Town of Saugeen Shores and the Saugeen District Secondary School (SDSS), the Rail Trail Association oversaw the construction of an historical centre built as a replica of the original Port Elgin CNR Train Station. The SDSS students, under the guidance of teacher Bud Halpin, built the structure complete with accessible washroom and historical displays. Now it educates trail users on the 120-year history of rail travel in Saugeen Shores.

Trekking the Southampton end of the trail will bring one to another historical feature of the trail, this one marking a tragic episode in local rail history. On the night of October 16th, 1954, the day Hurricane Hazel battered Ontario, a train coming into its Southampton terminus didn’t make it. Heavy rain from the hurricane had washed out a section of the track and the engine derailed, sending the entire train over on its side. The locomotive’s engineer and fireman were killed in the accident. Miraculously, the rest of the crew as well as the passengers escaped without major injury. A memorial garden and lookout on the Saugeen Rail Trail now marks the location of that accident and remembers the two trainmen who lost their lives that day. “Of course, none of these walking trails or memorial gardens or lookouts would be possible without the support of the community,” says Bruce. It takes countless volunteers and thousands of dollars to maintain and develop the Rail Trail system. Fortunately, the community has always been wonderfully supportive – starting with the Town of Saugeen Shores. “Since the beginning the municipality has been an active partner in the Rail Trail,” says Bruce. “Working with us on expansion and improvement ideas. Providing between $10 and $20 thousand a year for ongoing maintenance such as grading, resurfacing and trail paving. We wouldn’t have this trail without their support.”

Generous Supporters But the Town’s financial support is not enough. “Overall, the annual cost to maintain the Rail Trail is about $30 thousand,” Bruce points out. “And trail enhancements are funded separately.” That’s where local businesses and service clubs come in.

Then there are the Rail Trail memberships and individual donations.

Currently the Rail Trail Association has about 125 members, Bruce points out, but they are looking for double, triple … quadruple that. “We always encourage people to show their support for the trail by becoming a Rail Trail Association member,” he says. “For the $20 base membership, we can run the trail tractor for four hours. That’s a lot of grooming.” Since the Association is an authorized charity, donors and members also receive tax receipts. And donations of $50 or more are recognized at a Rail Trail information kiosk located at River Street in Port Elgin.

The fund raising doesn’t stop there. Every July 1st the Association hosts a walking and biking event on the Rail Trail. People come out by the hundreds to use the trail, put some coins in the collection pails, and to celebrate Canada Day. “It’s a fun, family-oriented day,” says Bruce. And there are usually giveaways, too. Bells for bicycles. Reflector lights. “Even copies of the Saugeen Rail Trail safety guide,” he smiles. While donations are critical, the Rail Trail also relies on volunteers. And Bruce cannot say enough about them. “We have a group of dedicated individuals who donate literally thousands of hours of labour a year to the Rail Trail.” They trim branches and bushes. Fill in potholes and clean up debris. Pull weeds and plant gardens. Carve ski and snowshoe tracks in the winter; groom stone paths in the summer. And those are just the ‘official’ volunteers.

Community Volunteers “We also have a legion of unofficial volunteers,” admits Bruce. Daily users of the trail, along with residents who live adjacent to the trails, are constantly pitching in to cut grass, pick up garbage, and generally keep the trail in a well maintainedstate. “It is truly a community trail.”

Bruce himself goes out on daily trail inspections. All year long. “Not only do I get a lot of personal fulfillment from volunteering with the Association and giving back to my community, but it’s also something my wife, Anna Maria, and I can share.” The couple can often be seen walking the trail together after a windstorm – chain saw in tow.

Of course, Bruce and his wife are not always working when they’re out on the trail. “Sometimes we walk and bike it just for exercise and enjoyment,” he smiles. A popular route for the couple – as well as for many others who use the trail – is to cycle the entire length of the Rail Trail and then loop back along the North Shore Road that runs between Southampton and Port Elgin. Not only does this showcase all the wonderful features of the Rail Trail, it provides spectacular views of the Lake Huron shoreline as well.

Being out on the trail system as much as he is, Bruce solicits feedback from users. “I ask people what they like about the trail and what we can do to improve it.” The ideas that he and other members of the Rail Trail Association get back help to direct trail maintenance and development projects going forward. And going forward there is an ultimate goal. “Ideally we would one day like to connect with the Kincardine trails,” Bruce says. The Kincardine Trail Association, in partnership with the Municipality of Kincardine, maintains their own system of walking paths stretching from Kincardine to Inverhuron Provincial Park. Connecting the two systems would create a wonderful network of trails, Bruce points out. “You could cycle, jog or walk along a safe and scenic path from Southampton to Kincardine!”

“The Rail Trail is an invaluable feature of the Saugeen Shores community,” Bruce says. “Residents and visitors alike look forward to walking, running, cycling – and now cross-country skiing and snowshoeing – its network of trails. With ongoing community support, it will continue to be a source of exercise and enjoyment for everyone in the area for decades to come.” If you would like to join the Saugeen Rail Trail Association or contribute to the continued upkeep and enhancement of the Rail Trail, please go to www.saugeenrailtrail.ca. Memberships and donations are tax deductible. And anyone interested in volunteering their time to help maintain the trail system can sign up at the same website. Please help blaze the trail! 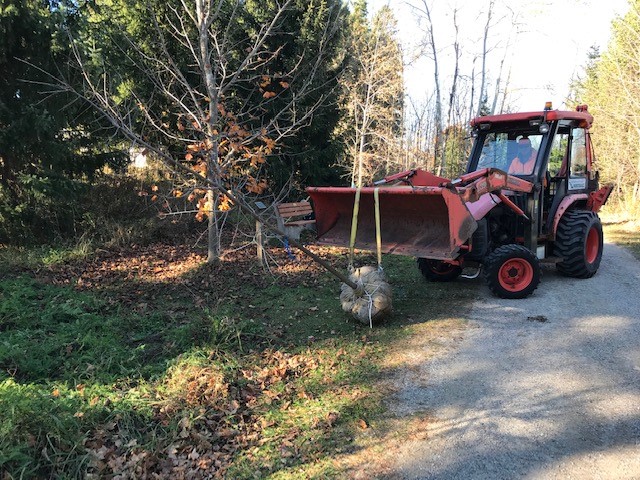 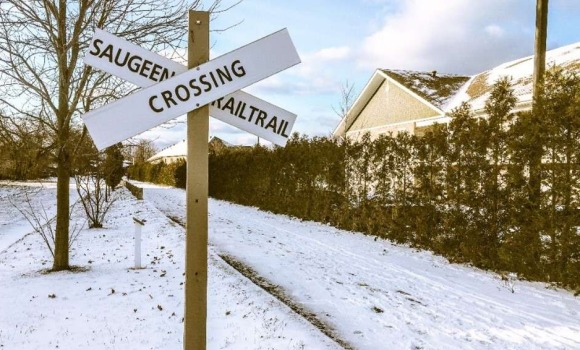 Winter Amenities: Get Out and Explore

January 28, 2021
Saugeen Shores has enhanced its outdoor offerings to provide more opportunities to get outside and more amenities to enhance the experience. 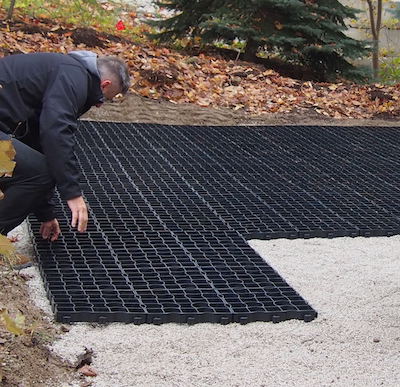 October 24, 2020
As more and more land in settlement and traffic areas is built upon almost all projects feature sealed asphalt or concrete surfaces that prevent natural permeation of rainwater and requiring expensive surface drainage systems or levelling work.

Our mission is to preserve, maintain and enhance our Rail Trail, providing all members of our community with a safe, clean and accessible resource for exercise and enjoyment.