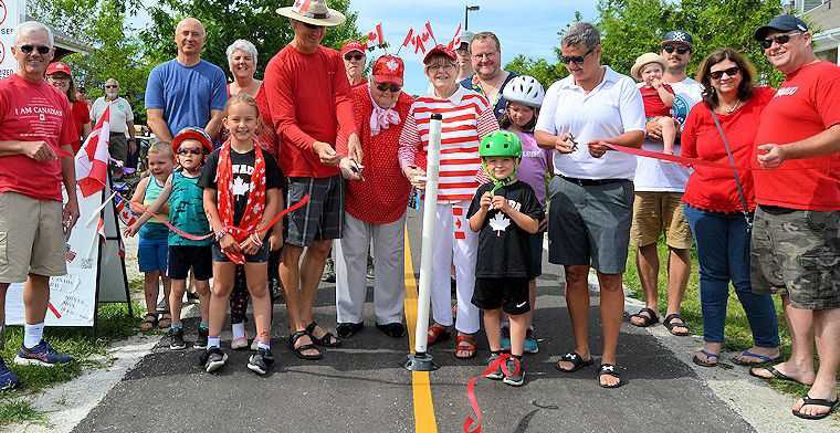 Without the volunteers, there would virtually be no Rail Trail system in Saugeen Shores.

The many members of the not-for-profit Saugeen Rail Trail donate thousands of hours of volunteer time as they maintain and develop the Rail Trail that has become one of the most widely recognized multi-use, fully accessible trail systems in Ontario.

Working in partnership with the municipality of Saugeen Shores that provides an annual grant, the volunteer membership-driven organization also depends on private, business, corporate and service clubs’ donations that include among others Port Elgin and Southampton Rotary Clubs, Bruce Power, OPG, Home Hardware, Saugeen Valley Conservation Authority, Trees for SauGreen, SDSS and any other partners throughout the years.

The Trail is a valuable asset to Saugeen Shores – both to permanent residents who can enjoy the trails year-round, and to tourists and summer residents who look forward to utilizing the trails every year. Thousands of people from cyclists, to walkers and hikers, to those in search of greater adventure are using the Saugeen Shores trail system and it has become a source of enjoyment for everyone who uses it in the community.

The major project this year was paving the Trail from Concession 10 to Elgin Street, thanks to a generous private donation of $75,000 with the Saugeen Rail Trail providing the balance of $11,000, in addition to 400 hours of volunteer time to complete the project. This section of trail has had a significant increase in mobility devices, in-line skating and skateboarding and other wheel-sports usage, with all users respecting the posted ‘Share the Trail’ rules.

In addition, there is on-going maintenance, weed control and grading, resurfacing and trail paving. This year, the entire stone dust section of the trail was groomed and, partnering with Trees for SauGreen and TD Tree Days, volunteers planted 150 new trees along the Trail in August.   The group also continues to maintain and enhance all aspects of the Saugeen Rail Trail, including historical sites, gardens, murals, and all areas of the trail with a focus on accessibility.

Rail Trail members donate thousands of hours of physical labour and time to complete projects. Volunteers are out grooming and resurfacing the trail whenever it requires it, as well as clearing debris after a storm and trimming branches and overgrowth throughout the spring, summer, and fall. Daily users of the trail and those who live close by, or adjacent to the trails, also cut grass, pick up garbage, and keep the trail looking well trimmed and maintained.  “It truly is a community project,” said President Jessica Carter.

Despite membership doubling this year, the income generated is not enough to sustain the group’s budget or future projects. The annual membership at a cost of $20.00 however, makes membership accessible to anyone who would like to support the Rail Trail officially.

To keep up with operating costs and expenses of equipment and supplies, the Rail Trail Association has requested an increase of $5,000 to its Town grant of $15,000 for a 2020 total of $20,000.  When taking into account the costs that would be involved in labour to maintain the Trails without the volunteers, the increase is relatively small.

Vice-Deputy Mayor Mike Myatt and Councilors, Kristan Shrider and Cheryl Grace have all expressed their support for the increase.